Make a quad copter that can make pictures

Related and inspired by:

Below some mind blurbs. A list with parts, the weights, and costs is here: Parts-NarCopter.ods

It already has connectors, so it is a matter of plug and play according to the advertisement. The quad has been modified by others, e.g. other motors, other RX, training wheels, landing gear, one person snapped off one of the arms and made a tri-copter of it (and it still flew).

Forum thread about this copter

The firmware might need customization. In an earlier version the motors kept spinning when on standby, and a minor change might be necessary to connect with the TX.

I want to add landing gear and training wheels (rings around the motors). Update: no need for landing or training gear, the thing crashed into the door so many times without breaking anything. It will be fine. 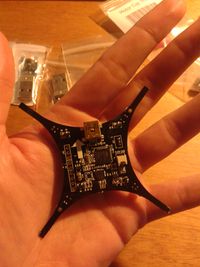 18 January 2014: I could borrow the transmitter battery from The JinX. First, the pocketquad had to bind to the transmitter module. I followed the instructions in this quick step by step guide, but had some problems working through the last step; the MultiWii_2_2-gui/MultiWiiConf software. The linux version didn't recognize the device, and I couldn't properly pass on the device to a windows virtual machine. On another system with windows on it it did work. I think the wingui software doesn't scan the ACM dev's on linux. In the end it was "solved" by making a symbolic link to the USB ACM device.

After setting up the transmitter "gear" switch as "aux1" (arm the device), and a quick calibration, it flew.... a little bit. It goes in all directions except the direction I want it to go, but there is movement. It does take off, after which it quickly moves forward and crashes into the door. Next step will be to calibrate the quad better.

19 January 2014: Removed motors, receiver and battery. Recalibrated the quad. Assembled it again. Result: it flies much more stable now. More flying resulted in a broken propeller. Hamish designed a frame with rings around the propellers. Result: it barely lifts off (too heavy)... and a broken frame (the printed one, not the main frame) after flying with it. 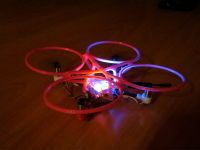 23 January 2014: I got very useful tips from phicoh. The quad calibrates on start-up, so you should balance the quad while connecting the battery. Furthermore the expo levels for ELE and AIL were set to 20. These settings helped to make the right stick of the transmitter react slower, which makes the quad less jumpy. Need to have a look at the rudder settings next, since that is not reacting very well.