NOTE: THIS IS NOT THE CURRENTLY 'IN USE' LASERCUTTER.

That one belongs to 'sawugo' and is documented here: https://wiki.techinc.nl/LAOSLaserCutter

It works in it's current form, but insanely unhandy.

It's nonfunctional in the sense that it's a windows-box with two dongles required to run the software on XP; no import options for normal formats and ...well.. yeah, it's non-functional as I just remembered that it has a tendency to suddenly go awol and cut/engrave elsewhere than the program dictates, or suddenly change scales of vectors.

That, in short, is what is still required for the laser-cutter to be used.

There is a laser-cutter i have available for the space. It requires modification to be usable. It's a so-named 'cheap chinese lasercutter'. If you google for it you can read about the horror it is to use it with the supplied (windows-only, dongle-protected) software.

So, to make it usable it requires a brain transplant. The brain chosen is to be a laos-laser board from the Laos Laser project (thank you Jaap). The board itself is built and tested. The required micro-controller is present but requires programming and the testing and calibration, etc.

I reverse-engineered the current wiring of the laser-cutter as it is and have a good idea of how to get the new board to interact with the stuff that's not going to be replaced (PSU, Laser-PSU, control-panel, Steppers, Limit-switches).

All of the components use pretty standard 2.5mm pitch connectors; no probs there. Except one... One connector is one of those flex-cables typically used to connect LCD-screens to motherboards of laptops; it has a couple of blank copper-traces on the end that need to be pushed into the connector on the current controller-board. This flexible connector leads to the X/Y table and has signals for (at least one of) the stepperrs and limit-switches carried on it. I have the documentation for it somewhere but it shouldnt be too hard to figure out again.. The connector is hard to find, however, in catalogs and such; unless you can figure out what the name for one of those things is and get exactly the right pitch, etc. I believe another person who had the same problem harvested one from a broken VCR.

My current idea was to de-solder the connector and make a small intermediate board that'll convert the pinout from the Laos-board (which has screw-terminals for all connections) to the flex-connector. Then, when replacing the current board with the laos-board i can keep the older board functional in case I need to re-fit it to test things if the laos-laser board refuses to work right out of the box... etc... The old board needs to be kept in a workable state for that reason.

What i HAVE done already is to fit the laser-cutter onto a specially-made table-surface with two small cabinets on wheels below it that'll contain all the accesories, etc. Also there's two LED-lights acquired that need to be fitted to the machine once the electronics have been taken out (so that no chaff falls on the PCB's and fucks things up). Also, a plexiglass carrier needs to be made to carry the laos-board with the same screw-footprint as the current board.

Also the laser requires cooling. The cooling in the current setup is done by sticking a small waterpump into a bucket and hooking it up to the tubing leading to/from the lasertube. No temperature-monitoring is present; if the pump malfunctions the laser will overheat and die. The pump , already, is malfunctioning. It needs to be replaced and pref. also monitored. My idea was to use the space between the two cabinets to put a heat-exchanger there with forced air (like watercooled PC) and keep a temp-monitor on it that'll cut off the power from the laser or somesuch. I'm rather sure that if this doesnt get done that someone will fry the lasertube for sure and cause a 300 euro repair.

I'm planning to, in September, free up some weeks of my schedule to work on my house; i could put one or two days into work on the cutter , especially if someone's willing to help put in some work, too.. Esp. the carrier-board and convertor-pcb are nice things to have prepared before unscrewing anything on the machine as it is now.

Inquiries can be made to my address or on the talkpage.

20:45.51 <@Ikarus> btw, for anyone working on the laser, put the LAOS board in a metal box and put choke ferrules on all leads possible 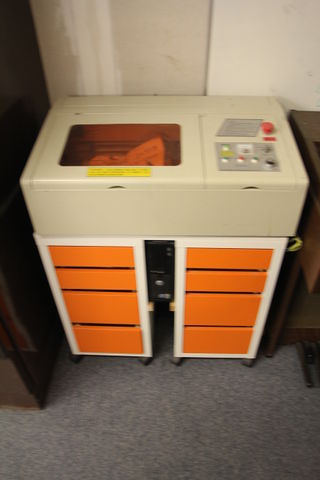