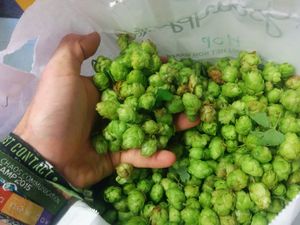 Harvest of wild hop from garden, 2015

Brewing beer is easier when you think.

There's a number of people in the space and other 'interested parties' who'd be interested in putting together a number of things to aid in the brewing of beer. A number of them have already brewed before; sometimes only from 'syrup', however, and not from 'full grain'.

The aim of this project is to get together a group of people and pick a date and place to bring a number of tools together and perform the brewing of a few batches of full-grain beer. Expect to learn how beer-brewing takes place, as well as be experiencing all the associated skills that go with it. It's likely we'll need to weld a stand for a burner that'll support a 50-liter brewing-vessel. We'll need to work on adjusting/tuning/extending the malt-mill(s). We might even venture into automatic temperature monitoring and regulation, etc etc. etc.

In other words; all the best things of all disciplines mashed up together.

We brewed a around 18l of IPA and 13L of dark dark stout. Expect more info about these brews.

Note: the beers have been bottled and have been divided between Piele and Justa. Parties interested in trying them are invited to contact either person.

Yay! Beer Brew Day II is upon us!

We're going to go for a ServerRoom Saison; nicely kept at a high fermentation temperature by use of the electrons we recycle in our server-room ! (or is it the holes we're recycling....current is so confusing).

We'll be trying to bring a number of beers with us from the previous brew-day, as well as some personal brewing experiments from home. Likely, we might brew a second beer too; style yet to be determined. Suggestions welcome !

What did we make?

People to inform about next events