Two decades ago I purchased a Weller® desoldering contraption that is compatible with the venerable WTCP-S soldering stations. It consists of a heated suction tip leading to a rubber 'bellow' that you're meant to squeeze & hold and release it at the right moment when the solder you want to suck away is liquefied. For various reasons I never had any success using it. Probably partly because the suction it creates is much too small and acts too slowly, especially compared to your standard desoldering tools which are spring-loaded. And in other part possibly because the act of suddenly releasing the bellow is not entirely compatible with keeping the desoldering tip steady and motionless at exactly the right spot. So it ended up in a box in the attic.

Now with the Chinese offering various nice and cheap parts I decided it was worth a shot to electrify it; a small vacuum pump, a solenoid valve, some buffer vessel and some tubing ought to be all that's required. The hacked soldering station I built has plenty of extra power available, both 12V and 24V (100W ring transformer, 2 12V secondaries in series to make 24V). It just needs a rectifier for the vacuum pump and valve.

Having finally received the pump and valve this weekend I set out to acquire fitting tubing and make a quick 'n dirty prototype setup, as pictured.

Testing it, this vessel (a small soda bottle) builds up sufficient vacuum to have the tip suck air for over 5 seconds so that ought to be largely enough. But maybe the nozzle is simply too small. I think I have different sizes nozzles in that box in the attic, so I ought to try real-life desoldering to get proper test results. Was not successful yet in locating my spare nozzles.

I've decided what to go for on the iron; a tiny glass bottle (think perfume/medicine size) with two metal conduits entering from front side. That ascertains hot solder can never get sucked in to the tube (unless it learns to do a mid-flight U-turn) and thermally insulates the PVC tube enough from the hot tip. I used a piece of aluminium 6mm OD pipe that I managed to fold as a U-turn using a pulley wheel as 'bed' to help avoid it kinking or breaking. (You gotta get a little inventive when your pipe bender is only suited for 12mm and 15mm...) Lacking a suitable cork I figured to glue both pipe ends into the bottle using two-component adhesive. It will likely be years, if not decades, before the bottle fills up with solder, so it's a design compromise I dared to make. I have to wait some 24 hours for the glue to cure completely now before I can test whether my design holds up to scrutiny... one aspect is physical strength... the whole assembly is not supposed to be attached to the iron except by the heating element. That way you can still replace this thing with a regular solder tip. But that then means that the glass bottle neck combined with the glue has to withhold all the stresses that the movement and weight of the tube exert on it... that's interesting. As it turns out, it's mighty solid.

Today I tried to purchase tiny '2-oor slangklemmen' in vain. These will be added later. However, the rest of the work got finished today; I thought long and hard about a suitable case but found none that were good. I decided I wanted to overhaul my solder station anyway so I rethought all of it and made a new layout, housing some extra electronic parts inside the old case, but leaving all of the pneumatics just outside, in plain sight. I added a bridge rectifier, an extra switch for the pneumatic section. A microswitch to activate the valve has been wired up but still needs to find a nice spot on the soldering iron. That's the second todo item.

The end results are depicted here.

Entire unit with 3 weller irons (only two should be used simultaneously; 100 W transformer): 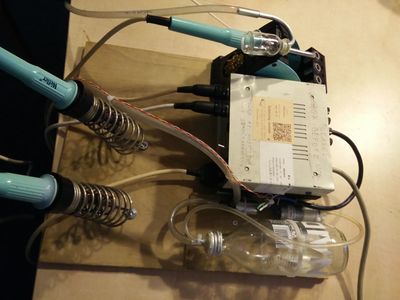 Soldering iron closeup. Missing is the actuator switch. Ideally I'd want it on the tube assembly, not on the iron, as the iron then can simply be detached from it and fitted with a regular tip for normal work. Then again, the switch also needs to be in a spot where it is easy to operate. Finding a solution to both is hard. For instance, the switch would be okay on the underside of the bottle but... then it would impede the soldering iron from being detached too; it would block it. So I'm not yet clear on how to best do that... Some other members suggested a foot switch... yeah... no. I'm resisting that idea for now. 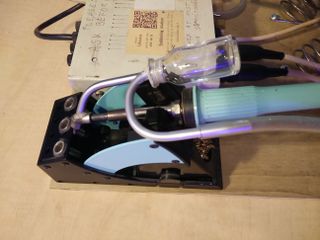 First tests de-soldering stuff were moderately successful. The suction is good, but I need to try this on more 'demanding' PCBs too, like double-sided, multilayer, and, the horror! lead-free solder material. A mild worry is that none of the sucked-up solder has yet ended up in that bottle, so it will likely start to clog up the metal pipe between tip and bottle. I need to test that hypothesis and also find out how well or hard that is to free up. I'll try to use a bendable guitar or bass string I guess, to push stuff out. Another mild worry is that I see much moisture in the assembly. In the tubes, everywhere. I'm unsure if that threatens any part or device. And if so, is there a way to get rid of it...? More testing soon.

More testing... yielded problems. There was clogging in the system. Directly behind the nozzle, and continuing past the curve. I tried to get it out using various means like hooks, hand-operated drill bits, prodding wire, etc. which all failed to remove the bulk of it. We had to resort to heating the tube up with a hot air station and only then managed to get the pipe empty eventually. I don't know if a part of the solder was sitting there since the nineties or that it was all fresh, but renewed solder suction tests indicate, again, that solder doesn't end up in the glass bottle but stops beforehand, so inside that same curved pipe. :-( There are two solutions I'm contemplating. One is where I make it possible to detach whatever's at the end of the pipe so one can push/prod from both sides. If the bottle cannot be removed possibly an all-metal airtight joint exists for 6mm pipe. That way I can saw the pipe in half and insert that. The other is simply removing the curve in the pipe; the only reason for it to be bent was that the bellow needed to end up above the solder iron grip. There is no such requirement any more obviously; the glass bottle could simply be closer to the tip and pointing upwards in a 45 degree angle. Some things would need to get solved, primarily that whatever holds the bottle there can sustain the considerably higher temperatures. But a straight and shorter pipe would likely solve the problem completely; not only is the chance higher the solder ends up inside the bottle, but even when it gets clogged, the plug could be pushed out or carefully removed with a drill bit and some munching. So... not impossible to fix, but there's yet some work to be done here.

Update: I've bought a 6mm knelkoppeling but that seems not a viable plan; the thing is huge, and heavy. Like a stack of 7 pcs M8 nuts at least. I fear the added weight and mass will hinder heatup of the device and impair handling. I found out that Bison sells a High Temp silicone kit that is good to use up to 300 degrees celsius. So I will use that for the bottle instead of 2-component glue. Hope it's sufficiently strong... And to connect two ends of 6mm pipe, one doesn't need a knelkoppeling... just a length of aluminium pipe with ID 6mm would be sufficient. Tests then have to show whether the kit is needed there as well, or that it is sufficiently airtight already. I hope for the latter, then one can detach it there to de-clog it should the need arise.

In the meantime, sucking up solder did seem to work fine. A tad more suction power would be great but... this does the job fine already. Large copper surfaces are very hard to heat up sufficiently, but that happens with all the other means by which to remove solder as well, so that is not a valid drawback for this specific method or equipment. Maybe if I can get a larger nozzle it might improve.

Some small trivia: I hesitated on how to mount the motors and the vacuum buffer glass. Glueing would work but hard to hold in place during the curing process. Tiewraps would need something to hold on to. The base plate is just 9mm plywood so nails or similar would not be secure. Then I thought of just adding another layer of wood; simple and elegant. The tiewraps pass through holes drilled in the top wood piece, and at the underside of that I routed a small channel where the tiewrap sits, invisible. Then one single screw attaches this piece of wood to the base. I deployed a tiny amount of glue to stop motors and glass 'wiggling' in its tiewrap.

(*) Not exactly advocating to purchase it, but Reichelt still sells it [[1]]