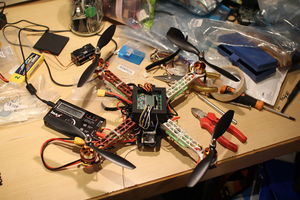 The first picture of Justa_copter_1

For a while now, i've been meaning to get into the quad-copter hype that's been raging through the hacker/maker/RC-communities. So far, the prohibitive prices and/or domain-complexities have kept me out. While I do love tinkering with electronics/tech/materials, I feared that the amount of time/work that I'd have to stick into making a quad-copter would be so large that it'd end up in a box as a half-finished project, never having flown.

The alternative would've been to buy a 'as-ready-as-possible' system and get that into the air with a minimum of fuss; but it seemed that the only solutions to achieve that involved paying a lot of money for fully integrated flight-controllers; anything from 100 euro and more for some of these.

The AUV-NG, Mikrokopter, Ardupilot, OpenPilot, etc, projects all seemed to come up with figures around 700euro for a flying and ready system after all the components and putting it all together. 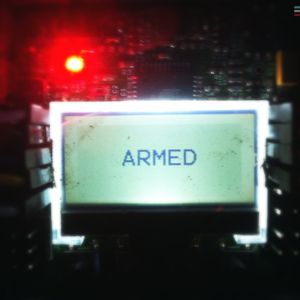 Recently, however, I decided to bite the bullet and look around to see what's available out there. The offerings available were actually quite surprising!

It seems that, outside of the well-known and 'pro-grade' projects out there, the 'DIY'-guys have been plodding along quite a bit as well and have had some luck getting their projects on the radar of a number of chinese manufacterers which ended up creating boards that are compatible with their firmwares. Most of these center around arduino-compatible systems; the MultiWii, MegaPirate and even some ArduPilot stuff.

In essence, most of the 'pro' boards are designed from the ground up to run on some fast processor, include 'the bestest' sensors and basically take a no-compromise attitude to the engineering-challenge. The arduino-based designs, however, seem more pragmatic in scope and have ended up including a lot of the more useful and worthwhile features of the 'pro' designs out there, over time.

In the 'simple' camp are a number of flight-boards that are based on simple analog comprators and a little bit of Atmega-logic to keep a quad or quadx in the air. On the other end of this spectrum are boards of up to 70 dollars (Crius V2.0 on ebay... cheaper elsewhere) that include an atmega2560 , ftdi, barometer, magnetometer and the usual accel/gyro combo's.

The boards are made to be arduino-alike. They either require an 'ftdi-cable', an 'isp-programmer' or even come with an FTDI onboard. A lot of them can be programmed from within the arduino programming environment for this reason.

I'm still digging through the several code-repositories out there, but at least MultiWii and MegaPirate seem to be much of the same thing; projects spun off from code that turned an arduino + a Wii+ into a quad-copter controller. The Wii+ is a little WiiMote add-on that allows for greature accuracy and stability for gaming due to better MEMS-gyro/accelerometers; connected via the i2c bus that the WiiMote uses.

From there, people made boards with different gyros/sensors/etc and some of these designs were generalized to such an extent that chinese designs started to pop up that worked for different firmwares and a great number of different multi-rotor configurations, among which anything from 3 to 8 rotors AND two servo's (for camera-rig). Tri-copters use a servo to angle thrust on one of the rotors.. Some of the firmwares are even geared towards adding stability to winged models, instead.

There's also an interesting 'odd-ball' called the 'KK' or 'KaptainKuk' board. Korean in origin, the original KK-board wasnt very advanced and has been plagiarized/copied innumerous times. The KK2.0 , by contrast, is a very convenient device , offered in cooperation with Hobbyking.com exclusively, and provides for an onboard LCD and buttons to configure all it's operational parameters 'on site'. Sadly, no support for telemetry/gps/etc or any interaction with third-party gear is the result.

Another thing that has been a long-time 'blind spot' has been the proliferation of different ways to drive the motors in all the projects out there. A number of the pro-projects rely on i2c-based speed-controllers. They offer custom-designed boards suitable for driving motors; even integrated boards with four of them on one PCB for use in a quad-copter. Great, but a lot of work and quite expensive.

To work around the expense, people have explored ways of modifying the readily available Electronic Speed Controllers (ESC's) from China, as many of them are based on Atmega-chips, like those used in the custom-designed ESC's of the pro-projects. The results are the Quax, BLHeli and SimonK firmwares that either allow for higher PWM-speeds, better linearity, greater performance or even add I2C support to cheaply available chinese ESC's in the market. Lately, the market, itself, has realized some of the needs of the multi-rotor community and has gone out of it's way to provide high-speed PWM-capable ESC's with linear control, specifically for multi-rotor applications. Some even list the type of CPU they use. Some hint to the suitability for other 3rd-party firmware.

When the multi-rotor rage was yet to start, it's enthusiasts had to rely on the availability of a limited amount of motors that were suitable for their applications. Strong, low-speed motors were used in the upcoming 'park-flyer' line of plane models but could easily cost 20 euro a piece. Nowadays, however, in the slow-and-powerful class, there's a plethora of options available which almost all cost less than 15 euro a piece. Some motors can be had for 9.20E including propellor-adapters.

While building a frame for a quad-copter is actually not a hard engineering problem at all (use light and stiff materials; carbon-pipe, alu-pipe, sheet-alu, etc), even this seems to have been jumped upon by chinese manufacturers in the last couple of years. There are frames available for less than 10 euro made out of nylon and fiberglass. To get a working and simple model together can be less than 1 hour of putting things togethether. 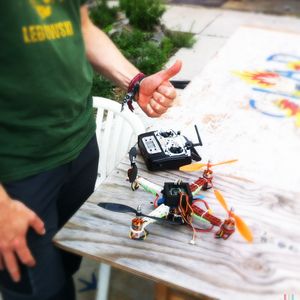 preflight check of justa_copter_1 with TX in the picture

On the rx/tx side; things have improved as well. Although the plethora of options out there can be quite confusing, it'd seem that there are a number of modulation/encoding techniques available in the 2.4Ghz band that have offerings from multiple brands (or OEM's). FASST, DSM2 and a number of other acronyms indicate certain semi-interoperable standards. The downside is that it requires a bit of forum-digging, manual-reading and a bit of faith to find offerings that are compatible with eachother. Luckily, they're also a LOT cheaper than the 'old guard' brands seem to have been. A lot of the new stuff also allows for digital configuration; hooking your TX up to a PC and setting all manner of options in a GUI. Quite interesting!

I had already purchased a transmitter from Conrad a while ago to start getting into RC with. Hooked up some servos, bought some extra receivers. Found a linux-based clone of the program that allowed me to program transmitter-settings, etc.

From there, the idea was to get a quad-copter in the air. A couple of weeks trawling through Hobbyking and manuals got me the following setup together.

Given that each motor can deliver around 500g of thrust and there's 4 of them; this *should* fly... though how fast and how stable/maneuverable remains to be seen. 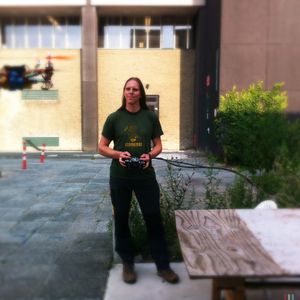 All the parts as listed above came in and the device was put together. It was glorious!

However, it didn't quite fly at all. The KK2.0 board worked fine, i was able to configure all kinds of settings and get it to tell me which motors spun which way. The gyro's and accelerometers worked and got calibrated. The receiver test worked fine..

But somehow, the device simply wanted to lift off.... and flip itself over .. So I brought it to OHM for some copter-doctor advice, but ended up having little time for it.

Then, however, me and Sander went to Rembrandt park to play a bit with our copters and it was then that I discovered that there was a cabling-error in the ESC-wiring. All the motor-connections were offset by one. Output 1 was driving Motor 2, Output 2 was driving Motor 3, etc....

That fixed; it worked.. And soon I broke my first propellor. Sander suffered worse; the transport of his copter to the park pulled loose a wire...

After a little bit of tuning some parameters (mostly gains on gyro/accelerometers), the aircraft flies quite stably.

See more about it in Justa_learning_to_fly