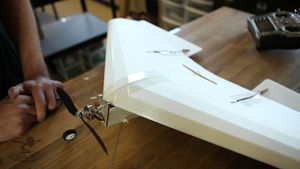 Example of a 'Pulling' Versa

The Versawing is a design for a foam-based airplane by the guys from FliteTest.com who have a great [channel].

Like many of their [plans] they are available for free from their site.

A friend (Amraem) has purchased a physical cut-out of the foam-sheets from their site and this has enabled me (Justa) to trace his material to prevent having to print out all the seperate sections on pieces of A4 and tape them together.

The intention is to produce a (slightly) modified version of the VersaWing that allows it to be flown as a 'pusher' instead of the 'puller' design shown to the left. 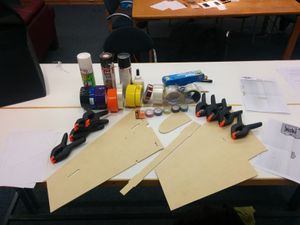 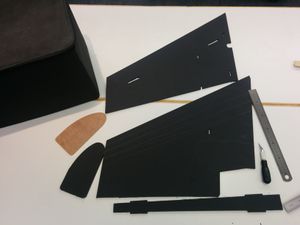 I've gone and traced the outlines of the paper-trace model that I had produced; reproducing them on a sheet of 3mm Triplex. Using a bandsaw, a drill, a dremel and some files, the resulting templates are shown to the left.

From these templates, a first cut-out version of all the parts for one side of the plane (left wing) have been produced. As far as I can make out, producing a full plane should be as simple as reproducing the same parts, but then mirrored (for the wing-top and wing-bottom, that is.)

Note that simply producing the same materials again *should* in fact result in the correct sheets, too.

Used material is 'FoamBoard', black, 5mm, acquired from [Van Beek art-supplies].A sheet of 70x100CM will almost *exactly* be enough to produce *one* set of wings, spars and wing-tips.

From my private stash, I still have 3.5 boards left after cutting the materials for one left wing.

It's become clear that it is greatly recommended to have a very sharp and pointy (straight-edged) knife available, like the one shown in the picture to the left. The horizontal slits and grooves are no more than 5mm wide in parts; making manipulation with an 'exacto-knife' difficult at best.

So far, the foam-board material proves to be very stiff and forgiving; even without having used any tape to strenghten it. The paper-layer is subject to moisture-damage, however, and will need to be protected/covered in some manner. Also, the question is whether the inner foam-layer is compatible with 'regular glues' such as Bison Tix, etc. If not, special styrofoam-compatible glues will need to be investigated.

The [kwantum] seems to have a perfect [foam-based material] available in the form of insulating under-floor material.

If careful, you might *just* fit the parts of one aircraft per sheet.

Did some stuff. Mainly we cut the materials from the kwantum material instead of the foam-board material that I had planned at first for my first design. The reason, for me, is mainly to have something similar as the others and learn from their experiences/successes/failures before I put the 'proper' version toget with foam-board.

The foam-board melts easily when using a hot-glue gun that's too hot.

The large size hot-glue gun I had with me was definately on the hot side. When applying glue it was a good idea to do it while dropping it from a bit of a height OR to cool it down directly in some way.

The motor-mount is an issue that can be solved in multiple ways. See the article on 2015-05-31 for more considerations concerning the different approaches we took.

We got most things together; connected/tested some electronics. Sadly one of Erwin's servo's broke and had to be replaced. 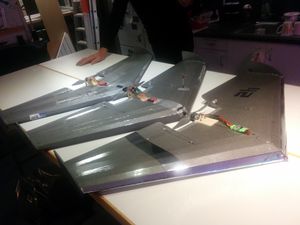 We finished three our three models. Please see the picture provided with this update for visual info about each model. In the same order as on the picture at the right. 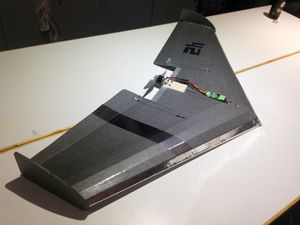 The front-most was made by Justa. 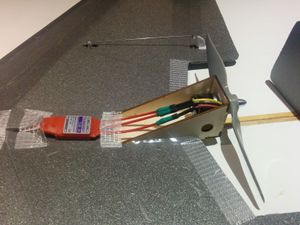 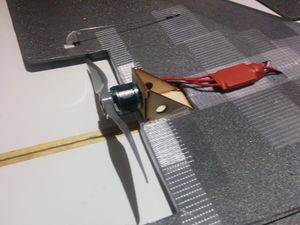 It's tricky to get the battery-hatch in the right spot; but it's do-able. Proper balancing with battery taped to chassis is a method.

A 2200mAh battery seems to fit nicely snug in front with still room at the tip for FPV set.

Creating space to properly tuck wires out of the way can be tricky. Connecting/disconnecting wires is somewhat of a chore.

Everyone so far decedid to connect their ESC plugs (3.5mm bullet-connectors) directly to battery. This may bite us in the ass when the first of us makes a mistake with connecting it and fries their ESC and releases the magic smoke.

Adding FPV seems rather straightforward when using the Eachine 200mWatt set. The camera angle is good enough to not have foam in view when mounted as far forward as it seems possible. No experiences with cooling yet. An air-duct might be required.

It is now a question of finding a good day to fly in a space where we can do no damage (to others...)