Some time ago I had a hobby more related to my nick, modelrockets. I made a few and launched a few, all low power. Then I started to make a payload with a height meter that sends the height and max height live to a ground station. Made with 2 arduino's, a Duemilanove for the groundstation and a smaller one (the JeeNode) in the rocket. The Jeenode has a little transmitter, but that was too slow for the speed of a modelrocket, so I use XBee's as tranceivers.

Information on that project can be found here : https://code.google.com/p/rocket-telemetry/

Long story short, I quit making and launching modelrockets and threw/gave the rocket stuff away except for the height module (and a camera module).

Now my goal is to use these payloads with a quadcopter. My version will be made so that it supports the payload segment, suspended below the quadcopter.

I already bought some stuff :

Things I already had :

First the frame, it is made of glassfiber and there where some small splinters at the edges, very small, but you still feel them so I used rubber gloves during assembly of the frame. It has an extra plate to mount a camera (size and weight of a GoPro)

The motors are shaftless so you have to buy a Prop accessory pack to fit the propellors. The center hole in the props I bought at rc-addicts where to small so I had to drill a bigger hole in it. Best done with a kolom boor. The was no specific reason to buy shaftless versions. They had the thrust I wanted.

After the copter was build I did some tests to see if it all worked.

Rotation (with rudder, horizontal movement of left stick in mode 2) was reversed, so pushing the stick left made the quadcopter rotate right and the other way arround. Solution was to reverse the rudder in the transmitter. 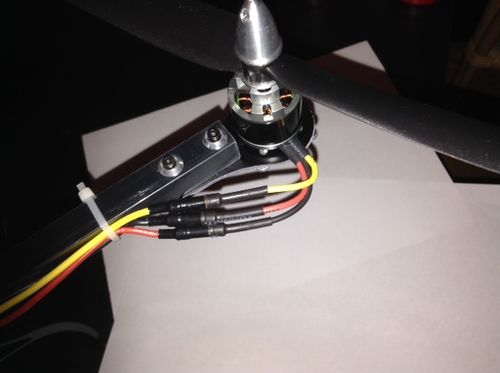 No liftoff with full thrust applied. Cause in my case : all the propellors where turning in the same direction, counter clockwise. So two propellors where pushing the quadcopter down and two where pushing up, so they basically cancelled each other out and apart from a lot of noise and moving air the quad stayed put (while slowly rotating clockwise). Solution in my case was to reverse the connectors to the two counter clockwise engines at the motor side. So put the black (ground) wire in the red (plus) wire connector and the red (plus) wire into the black (ground) connector. For me this fixed the problem.

Not really flying, attempting to fly. The HobbyKing i86 board isn't very stable, combined with my low flying experience this breaks propellors. So having lots of propellors is really useful when you begin with flying Quadcopters (as Justa said during his presentation). Today (29th Dec) I went to a big parking lot close to my home and tried it out. I was able to get it off the ground, and while the Quadcopter was below 1 meter it went okay, there was enough time to cut the throttle without harming propellors when I was about to lose control. At the last attemp it accidently went higher (to 3 meters) and the wind caught the Quadcopter and moved it away from me so I throttled down after which it went down in an elegant curve, destroying two propellors.

At last the KK2.1 flight controller arrived and more propellors. Installed and tested it on monday and today I went flying. This time at a different parking lot, of a big shopping mail, on sunday's, or new years day's very quiet and lots of space. Builings are conveniently located so that they shield the wind a bit. Flying with the KK2.1 is really nice. I practiced hovering and staying in one place. The settings where default, I only calibrated the ESC's, selected the right motor layout, X-4, and calibrated the accelerometers. Can all be done with the flightcontroller, throught the LCD display.

The throttle needs to be changed. There is a thing inside the transmitter that makes the throttle stick tick, to keep it in place. When you throttle up there is a point that the quadcopter starts hovering, but only slightly, it skims over the ground. One throttle notch up makes it goes up, but too much, so you have to throttle it a notch down again, then it lands and starts skimming the ground again. So with my transmitter, in the present state, you can't let it hover on a certain height. Might be a setting in the transmitter of maybe the flightcontroller has a possibility to change this. I'll check it.

I have flown again with success. Very slow and low but the quad does do what I tell it to do. I broke two propellors again, but had some spares so could continue flying.

I also installed three LEDs to know what the orientation of the quad is when it is futher away. Green for right, Red for left site and yellow in front.

Flying goes better, no more broken propellors. I dare to fly higher also, so I attached a small camera to see how that goes. Well, it goes with a lot of shaking, but it's nice to see the place where you fly from higher up.

The LED are in a different spot now, both red and green are in the back. On the side was too confusing for me (for now anyway) you had to think and when you have to act quick that might not work out well. When in the back you know right away how the quadcopter is orientated and what the stick movement does. In front is a yellow LED.

Flying is still simple, going up, down, forward, backward, left and right, no fancy manouvres. I tried it, like going forward and rotating in a direction, but I have to get a better feel for the orientation at all times. The place where I fly is a parkinglot with streetlamps and trees, so maybe finding another spot with grass and now obstacles isn't a bad idea.

Since I have flown some time now I get a feel how my quadcopter acts, there is some shaking, and now it's time to start tweaking. I will start with balancing the propellors. On Thingiverse I found a small stand for prop balancing. Combined with these prop holders I will balance them.

I have adapted the design a bit so max 12 inch props can can be balanced with it.