Difference between revisions of "LEDLightDistrict"

Project to LED'ify the outside facing glass 'block' wall. each glass box will be a pixel

As seen behind the blinds here. Better pics to come 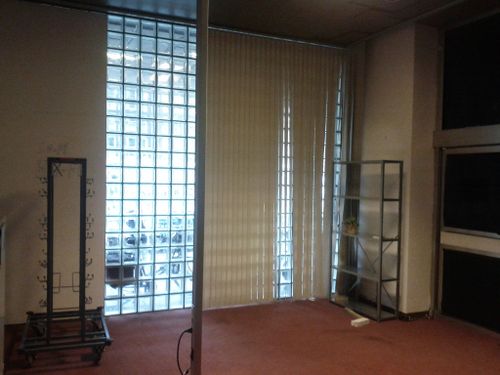 Create a 7 segment clock. User:amx109 is the owner and implementer of this project.

What we could buy

We discussed mounting these in the corner of each brick at an angle so the light diffuses better. Need to experiment to see what works best.

The above LED strips/chains are easily controlled via an Arduino with the excellent FastSPI library: http://code.google.com/p/fastspi/

Some suggestions by Axel: http://www.nerdkits.com/videos/ledarray2/

Simulate a pwm based shift register

We could order samples. 3 samples per person, so if 3 people order a sample, we have sufficient channels...

And at 8$ they aren't that expensive either...

These are bloody cheap though they are supposedly hard to program.

20$ per roll, and you have to buy 5 rolls minimum... but... 5m per roll, and... 40 color leds per m (from what I can tell). That means that we buy several screens, but in total it will still be cheaper. Strips can be cut per segment of two (studying the picture, correct me if I am wrong). This makes extending them relatively easy. We cut all wires to the appropriate length in one go. We have to connect some 150 of these strips, but it is repetitive work, so we can do it very fast.

Server running on node.js, control for any games using a browser window, interface with the wall using a C/C++ written node module.

Create online api for running code on the screen

It would be cool if people could browse to a site and enter code that they can run on the screen.

This does mean that you create a gateway for someone to run code on the server, and this code could be hostile.

How to keep it secure:

A game of snake. This project is almost done. It just requires some more practical website for controlling the snakes (right now they can be controlled using keyboard, which sucks for smart phones). See Snake implementation

No work done yet

It is practical to only work on it after better abstracting the framework to be used.